Partnership With the Royal Australian Navy

Since the very first launch of Ocean Reef Primary School, the school has maintained its proud tradition, beginning in 1988 with the establishment of a maritime theme by our founding principal Mr John Thompson. Mr Thompson took our location metres from the Indian Ocean and as a part of the Ocean Reef Maritime precinct as inspiration to model Ocean Reef Primary School as a virtual ship – The State School Ship Ocean Reef.

Our virtual ship has many naval links, our classrooms are known as cabins, the blocks as Port, Starboard and Stern, whilst our Early Years’ Education block is known as the Cadet Block. Our undercover area is a Quarterdeck, the library is the Chartroom and our ship is lead from the Bridge. Unofficially we have a Commanding Officer, the current Principal Peter Blackwell and an XO, our Associate Principal, Chris Smith! Many schools have senior students, prefects for example. At Ocean Reef, our lieutenants, commanders and School Captains; these students have a range of responsibilities and roles in leading the other junior crew members.

When our keel was laid, our school was built on the foundation of the values of the 7Cs Courage, Courtesy, Commitment, Common sense, Care, Cooperation and Consideration. We also now have the STAR (Sensible, Thoughtful, Achievement and Respect) that guides our expectations of students, staff and parents.

Whilst building the unique theme for the school John Thompson contacted the commanding Officer of HMAS Stirling to start a relationship that has lasted since that time.

Over the years, building a genuine partnership between the Royal Australian Navy and the School has been hugely valued by our students, staff and the community. We have been fortunate to be supported at many school events, such as the Graduation, ANZAC ceremonies and our Promotions Muster, when the senior students are awarded their rank.

For over 15 years, Ocean Reef PS has run a Drum Corps made up of mainly Year 5 and 6 Students. It has been our privilege to perform at the Celebrate Maritime Day in Fremantle as well as during our visits to HMAS Stirling.

The school’s Drum Corps have participated in the Celebrate Maritime Day in Fremantle event annually at the request of the RAN. We have always believed in trying to maintain a genuine partnership. In recent years students from Ocean Reef have visited the Naval base at Garden Island. We were fortunate to visit the submarine escape tower and inspect HMAS Arunta. Two years ago, our Drum Corps were fortunate enough to perform during the transition of the Commanding Officers’ of HMAS Sirius in 2019.

For many years the school had a sister ship, HMAS Warramunga and, more recently after they swapped home port, HMAS Arunta. The crew

of HMAS Arunta took an active role in a previous book week, visiting the school to read to the children and participating in our Extreme Reading competition. When we redesigned our school uniform we wanted to find a way to represent our naval links, the three stripes on the collar of our shirts were a deliberate design to mirror those of seamen. 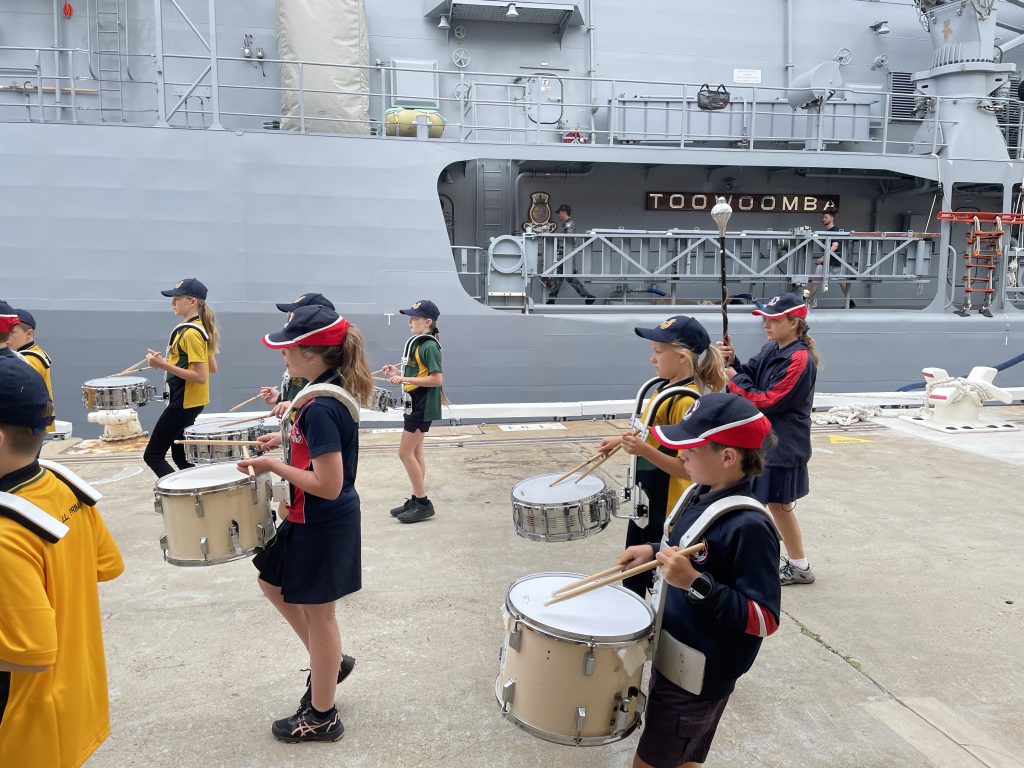 Keep up to date with all
school related news!
SUBSCRIBE!